Pulling branches is a measure of pulling some of its branches into a certain opening angle and position of missing branches with ropes, iron wires, etc. When the erect and angled branches are pulled at a large angle, the apical dominance of the branches can be effectively weakened, the germination rate of the middle and lower shoots can be increased, more branches and short branches can be generated, and more flower buds can be formed; The smaller branches are drawn to the larger missing branches, which can plumb the crown, fill its space, make up for its lack of branches, and overcome the phenomenon of biased crown, which is conducive to the formation of a tree. When the crown grows to a certain height, the central and lateral branches and extension branches are pulled down and pulled laterally, respectively, which helps to control the height of the tree and the diameter of the crown. In short, pulling branches is one of the measures to make fruit trees early and result. The apple tree pull method is:
Pulling the time, object and angle of branching time is appropriate when the growth of autumn shoots is slowed to near the stop length. Branching objects include lateral branches and secondary branches that are more than two years old; branches that are 1 to 2 years old at the front of the branches; and new shoots that are more than 70 centimeters old. In addition to the pull branch angle as a side of the backbone should be pulled to 70 to 80 degrees, the other branches should be pulled to 90 degrees horizontal and greater than 90 degrees of decline.
When pulling a branch, pull the base of the pulled branch with your left hand, hold the upper part with your right hand, shake the branch to soften it, and then use a rope or wire to pull a certain angle. When pulling branches with iron wire, objects should be placed on the branches so that they will not be embedded in the branches. The principle of pulling the branches is only to open the pulled branches whose angle does not change direction. They should be pulled to the required angle and be linear; the branches that need to change the direction and open the angle should be pulled. Only one corner of the base is allowed to be removed. The rest of the bend should be drawn straight to a certain position and angle; when pulling the branches backwards, do not stick to the center to prevent them from squeezing and fitting each other and breeding pests. The new shoots of the year should have a fixed angle of more than one month; two-year-old branches and perennial branches should have a fixed angle of more than two months.
In addition, pull branches should be combined with spring circumcision in order to promote the growth of short branches and multiple flower buds.
Author unit: Association of Science and Technology, Hechuan City, Chongqing

The edible part of cauliflower is the flower part of the dish. The raw materials are white, big, and free from diseases and insect pests. At the beginning of processing, the outer leaves and petioles are first cut off and cut into smaller pieces. Wash 2-3 times, blanch 1-2 minutes in 100 C hot water. Remove and quickly cool to below 10 C. Drain and freeze and pack.The whole process strictly controls the hygienic conditions and is committed to providing customers with safe, clean and healthy Frozen Broccoli. 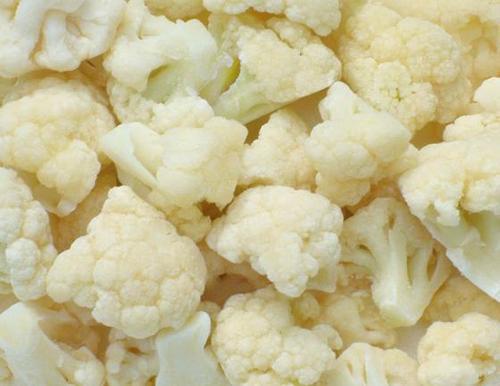