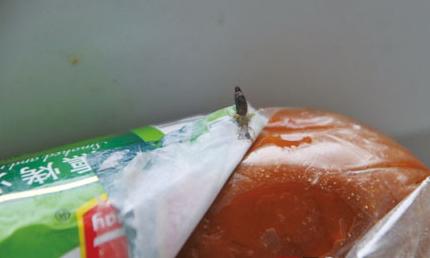 Henan consumer Ms. Wang eats Shuanghui ham and eats a black bug. After negotiating with the manufacturer and discovering that he has not been valued, he angers and asks for high â€œnasty feesâ€. Later, he learned that he was accused of "blackmailing." She said, "I don't want to be sick. I can't just say it." "Can you tell me where the insect came from?"

I just want to know where the insect came from. "This is a word that Mr. Xie, the Henan consumer and Ms. Xie of Shuanghui's Zhengzhou product salesmen, has negotiated for half an afternoon and finally thrown out. Xie Peng reported with a smile.

From eating Shuanghui ham to eat black worms, this is more than a month, Shuanghui's salesman, sales manager, and after-sales manager were the third â€œcommunicationsâ€ of Ms. Wang. As a result, the two parties still failed to reach an agreement.

In Ms. Wangâ€™s opinion, the starting point for Shuanghuiâ€™s â€œsolving the problemâ€ is wrongâ€”not thinking about how to eliminate quality risks, but rather just wanting to keep quiet.

Shuanghui's recent quality incidents, which are frequented by reporters from China Quality Weekly, found that after the shadow of the Clenbuterol incident, Shuanghui, a well-known Chinese meat brand, has experienced a intensive burst of recent quality events.

On May 18th, according to Huasheng Online, Hunan Consumer Solutions found a small white clam in the Shuanghui brand of spicy crispy sausages purchased. The sausage only passed the shelf life of 1 day.

After investigation, the industrial and commercial department ordered the supermarket to refund Mr. Xieâ€™s purchase price of 4 yuan, and ordered the merchant to â€œlose tenâ€ ham.

Shuanghui Group issued a statement saying that the consumers complained that the production process of the batches of ribs was normal, the factory inspection was qualified, and the cold chain transportation and sales links were up to the standard. It is not yet clear what the consumers' real motivation for pressing through Weibo to Shuanghui.

At the time of the incident, due to consumers' refusal to stay on the phone, Shuanghui believed that it was an unusual complaint and was suspected of extortion.

On the evening of June 7th, Shuanghui announced that it had sealed and retained sample products and sold some cold and fresh meat products.

On May 30, according to the Nanfang Daily, on the 28th, the Guangzhou Municipal Bureau of Industry and Commerce released the sample inspection of pre-packaged cooked meat products in circulation in 2012. Guangzhou Shuanghui Foods Co., Ltd.'s â€œShuanghuiâ€ Q Fun Childrenâ€™s Flavored Sausage was unqualified and the total number of colonies exceeded.

On June 14th, according to the Jinghua Times, there were complaints from consumers that the egg of the locust was found in the ham of the King of Shuanghui Wang and said that the ham caused her loverâ€™s sisterâ€™s threatened miscarriage.

This incident has aroused widespread concern in the society and has been called the "Locust Gate" incident. Soon, the Shuanghui Group officially announced the results of the investigation of the â€œworm locustâ€ incident.

The announcement stated that through expert analysis, the â€œStag Beetleâ€ incident should be due to improper custody of consumers or other reasons.

The batch of products did not have quality problems in the production process, and the factory inspection was qualified. If the consumer is not satisfied with the quality of the product, Shuanghui Group can be returned; the so-called "premature abortion" lacks scientific basis and there is no evidence to prove its causation. Therefore, Shuanghui does not assume any responsibility.

On July 12, Qianjiang Evening News reported that when consumers were eating Shuanghui ham, they found that one of them was actually a â€œhollowâ€ ham sausage. Shuanghui explained that it is a production process problem. According to the "Consumer Protection Law," consumers can receive "one compensation for ten" compensation.

On July 20, the Nanfang Daily reported that consumers were eating an unknown "plastic rope" when they were eating Shuanghui's "Sweet King" corn sausage. Shuanghui Group responded that there are two possibilities for the occurrence of unexplained plastic ropes in the corn sausage. It may be because the trimming of the raw material dressing process is not complete, resulting in plastic ropes on the raw material packaging bags remaining in the raw meat, and human factors are not ruled out.

The problem of the product being complained is an example. Raw material woven bags are harmless to the human body. The final consumer was paid 3,000 yuan, and signed an agreement with Shuanghui "not to pursue this matter later."

In fact, Shuanghui is not the first time that â€œintensiveâ€ food quality problems have appeared. According to the Beijing Morning Post, after the clenbuterol incident, Shuanghui experienced similar situations from August to November last year:

On August 24th, 2011, a Beijing consumer started acute enteritis after eating Wang Wangwang of Shuanghui. On September 6th of the same year, Shandong TV also reported that consumers had eaten casings from King Wang of Shuanghui Wangzhong; the same year 10 On the 26th of the month, the â€œQilu Evening Newsâ€ reported that a consumer in Shandong eats pork skin when eating Shuanghui Fuxianglai chicken intestines; â€œXiamen Dailyâ€ also revealed that consumers in Xiamen purchased it on November 21, 2011. Shuanghui Wangzhong sausages that have deteriorated within the shelf life... According to statistics, between August and November last year, there were at least dozens of news reports questioning the quality of Shuanghui. The problem products involved Shuanghui Wang Zhongwang. There are at least seven varieties of sausages, Q-queen sausages, mouth-watering sweet corn-flavored sausages, hams, Fuxianglai chicken sausages, and crispy intestines.