Chinese scientists have developed a kind of genetically modified maize. The seed produced by this transgenic corn is rich in phytase, which can help livestock digest phosphorus. Phosphorus is an important nutrient in corn and soy feed. The main components of the feed The fruits and seeds of the grains contain a large amount of phytic acid, which contains a large amount of phosphorus, but monogastric animals such as pigs lack sufficient phytase in their digestive tract to absorb enough phosphorus. This means that a large amount of phosphorus is discharged into the environment through animal manure. As a result, farmers had to add phytase as an additive to the feed. This enzyme additive is produced by fermentation of microorganisms and the production cost is high.
With government funding, scientists at the Chinese Academy of Agricultural Sciences isolated genes that produce phytase from a fungus belonging to Aspergillus and inserted it into corn. After seven years of breeding, the scientists finally got a genetically stable transgenic phytase corn.

Dr. Chen Rumei, the main member of the research group and the Institute of Biotechnology of the Chinese Academy of Agricultural Sciences, said that compared with traditional corn varieties, the transgenic phytase corn has no difference in seed germination rate, growth rate and yield. In addition, according to the current feed additive standards, the addition of a few grams of genetically modified phytase corn to 1 kg of corn feed can meet the nutritional requirements of phosphorus for livestock.

"If this technology is approved for industrialization, we can save 450 million yuan in energy consumption per year compared to the production of industrial phytase additives," said Chen Rumei. â€œThis allows farmers to save money for the purchase of additives.â€ Moreover, farmers who plant genetically modified phytase maize can earn 1,500 yuan more than the average maize planted per hectare.

Li Zhensheng, head of the evaluation team of the Ministry of Agriculture and former vice president of the Chinese Academy of Sciences, said that the phosphorus pollution from animal waste is a serious problem that has led to widespread algal blooms in Chinese lakes. "If phytase-rich feedstuffs are widely used, they can effectively reduce the amount of phosphorus excreted in the animal's feces. This has great ecological and social benefits," said Li Zhensheng. At present, China has not approved the commercial production of any genetically modified corn.

LEWIN Halogen Operating Lamp series Operating shadowless lamp can widely be used in diversified operation occasion to meet the demand of the illumination, CAD/CAM overall reflection optical system and a multi-revolving surface reflector of more than 4000 mirrors, its illumine depth is up to 1200mm,the lamp could  reach a center illumination of 80000-160000lux, Halogen Operating Lamp is the ideal illumination instrument of the modern operating theater.Advanced Irsorb filter can absorb 99.6% infrared and 99.8% ultraviolet,and special heat transfer design, an excellent cold-light effect. 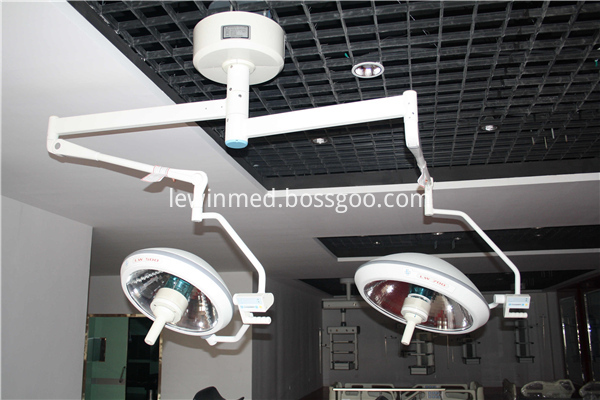